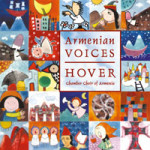 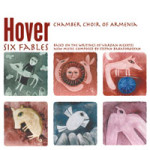 Six Fables: Based on the Writings of Vardan Aigektsi

The Armenian word Hover (wind) frequently occurs in beautiful folk songs by Komitas, a revered name in Armenian sacred and folk music, which is part of the choir’s core repertoire. Wind is a primordial element of nature and a life force – it is part of the ‘ecology of the soul’, a spirit sweeping through time and, like an epic, legend or tale…

The internationally acclaimed, award-winning Hover: Chamber Choir of Armenia was established in Yerevan, Armenia in 1992 as a performing arts group, consisting of 26 singers many of whom are students, or graduates, of the Komitas National Conservatory in Yerevan, Armenia. The choir is supported by donations and honoraria. The tale of Hover began over ten years ago, and continues to evolve……

Hover is a musical ambassador for Armenia and Armenian music, winning diplomas at the International Polyphonic Music Festival in Arezzo, Italy in 1997 and the International Competition in Tours, France as well as the gold medal at the International Choir Olympiad in Linz, Austria in 2000. In September 2003 Hover toured Great Britain, presenting concerts in Glasgow, Edinburgh, Cambridge and London.