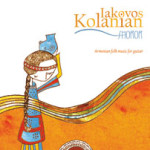 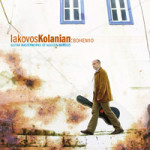 Iakovos Kolanian was born in Greece in 1960, to an Armenian father and a Greek mother. At the age of 13, influenced by the musical currents of the time (pop, rock, as well as classical) he started his musical journey that eventually led him to the National Conservatory of Athens. There, he studied classical guitar with noted professors Evangelos Assimakopoulos and Lisa Zoe, and graduated in 1985 with the top award and a special honor for exceptional performance. Since that time, he has attended various special seminars and master classes in Greece and abroad, broadening his knowledge of the instrument from distinguished teachers such as Oscar Ghilia and Leo Brouwer.

Throughout the years he has toured in Europe, Asia and Latin America, where he has presented to audiences a large part of the classical guitar repertoire. He also regularly takes part in important international festivals (Vienna, Milan, Athens, Israel, Cyprus and Yerevan) by giving individual recitals or acting as soloist with symphonic orchestras and ensembles of chamber music. He has performed as a soloist with Athens State Orchestra, Thessalonica State Orchestra, Symphonic Orchestra of Greek Broadcasting Corporation (ERT), The Camerata Orchestra of Athens, Armenian Philharmonic Orchestra, as well as with numerous ensembles of chamber music.

He has been regularly featured in well-known television and radio programs such as BBC, ORF, Radio France, ERT, RIK. One of these collaborations, in 1991, resulted in the recording and release of a CD of Loris Tjeknavorian’s Concerto for Guitar and Orchestra with the Armenian Philharmonic Orchestra―with the composer himself as the conductor¬―in a production of the Austrian Television (ORF).